Marc Cook from Kitplanes Magazine dropped by on Friday and shot a quick video on FlightView. Check it out here.

FlightView In The App Store!

I’m very happy to announce that the FlightView app is now available in the Apple App Store! To install it, go to the App Store on your iPad and search for “FlightView EFIS” or click this link.

EAA AirVenture 2021 (aka “Oshkosh”) is only a month away. I’m very happy to announce that Falken Avionics will be exhibiting and I will be presenting a Forum on FlightView. We will be back in the same booth location as 2019 – Hangar A, Aisle E, Booth 1043. If you’re able to make it to Oshkosh, please swing by to say hello and check out our FlightView and FlightBox Pro demos. This year’s booth will feature installation tutorials at 10:30 AM each morning, as well as the usual show-and-tell. 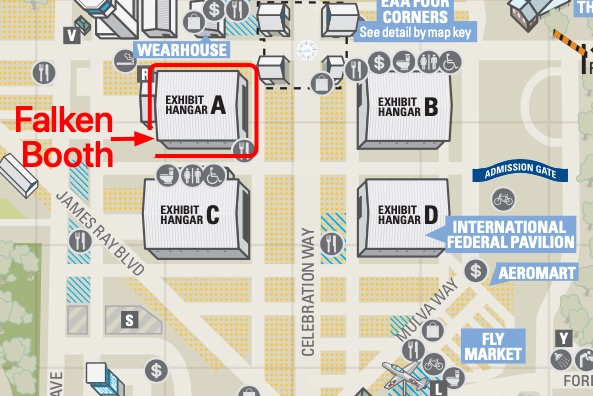 On Tuesday at 1:00 PM I will be presenting a Forum entitled FlightView – Inside and Out which will include a deep dive into the EFIS, explaining not only what it does and how it works but how to create custom add-ons and integrate new hardware and software. The presentation will be held in […]

TL;DR – version v0.4r22 of the FlightView app is now available in TestFlight. It fixes a bug with the RPM counter and adds an engine data logging feature.

Well, that was quick. Last night I received a bug report that changing the “Ignition Events Per Rotation” value (i.e. the number of pulses the EMS receives for every full turn of the engine) failed to update the configuration on the FlightBox Pro. Turns out that one letter in one parameter name was capitalized, so the code on the FlightBox that receives the update silently ignored that value. Computers… so picky. Anyway, an easy fix and, it gives me the opportunity to roll out another much-requested feature.

v0.4r22 adds engine data logging. The logs capture a 1 Hz (once-per-second) history of the engine values as reported by the EMS. Note that the current version assumes that the inputs on the EMS are […]

I am pushing out v0.4r21 to TestFlight with a set of fixes to issues uncovered in the past week. This version requires the same FlightBox firmware as the release last week (v2.3r1-7121b8ce98), so if you’ve already updated your FlightBox Pro EXP all you need is the new version of the app. (If you’ve not updated to v2.3r1-7121b8ce98 the app will prompt you to do so – see last week’s blog post for details on the update process.)

One of the issues uncovered last week was an application crash. It occurred when the app received an ADS-B METAR update that was malformed and could not be parsed by the app’s METAR decoder. The two users who discovered this issue had the unfortunate experience of having the app crash every time that METAR arrived (about once every minute). Fortunately the next refresh from the METAR site was properly formatted and the crash stopped […]

So after several months of coding and testing I’m pleased to announce the release of version 2.3r1 of the FlightView firmware and version 0.4r20 of the FlightView app. This update is both relatively minor (no really flashy new features) and very important. You can install or update the app now from TestFlight, and the app will handle the firmware update process for the FlightBox.

In addition to this blog post, I’ve also put together a short YouTube video that walks through the installation and the Setup Assistant.

Before we get to the good stuff, a few housekeeping notes:

After several months of neglect, I’ve updated the documentation (live version here and downloadable PDF here), which now weighs in at 151 pages. It’s still a work in progress, but it is much more complete and should make the installation, configuration, and operation much […]

Using off-the-shelf components is usually a great thing: we get to take advantage of the massive economies of scale created by the mobile device industry. Unfortunately, we also compete with the mobile sector for those parts when there’s a surge in demand. Covid has driven a massive boom in the tablet market, and many tablets use the same inertial and barometric sensors that we include in FlightBox and FlightView systems. Since our volume is tiny compared with Apple, Samsung, etc., we end up on the short end when there’s a shortage.

Throughout the past year we’ve been living under the threat of supply chain and manufacturing delays, originally due to shutdowns at the component factories, and later due to the spike in demand. Throughout 2020 we were lucky. That luck ran out at the beginning of this year. In early January I put in an order for enough parts to build […]

Move to Texas, they said…

Apologies to anyone waiting on an order. The winter storm currently gripping the United States has crippled the electrical grid here in Texas. We’re currently operating with power about half the time and the temperature in the hangar / office / shop is hovering at 29° F as of this morning.

Rumor has it that the normal weather and stable electricity may not return until some time next week. As such, I’m declaring a snow day (or snow week). I’ll do my best to keep up with email, but build and ship operations are offline until things thaw. Thanks for your patience!

Since launching the FlightView system the majority of the enhancement requests I’ve received are related to the engine monitor. A partial list of these requests includes:

Connecting to the TC90 control head allows you to use either the control head or the COM interface in FlightView to set the active frequency. All other configuration (volume, squelch, side-tone, etc.) is handled by the control head. This option is good if you have the panel space for the control head, as it gives you two methods for controlling the TY91 radio.

The TC90 control head has an RS-232 communications port that […]