Many users have contacted me over the past few days with reports of a new issue. In flight (or when near an ADS-B tower) the data flow from FlightBox periodically stops. It typically happens after 5 – 10 minutes of operations, does not cause the wifi connection to drop, and is remedied (temporarily) by a disconnect / reconnect. It only impacts systems running UAT – users with 1090-ES systems in Europe and Australia are not impacted.

After a bit of research, it turns out that our friends at the FAA recently changed weather providers and that some of the new weather data is a bit dirtier (less scrubbed for format errors) than before. Specifically, the format of certain AIRMET messages causes a fault in the Stratux software that kills the process. The issue required a very minor tweak to the code to remedy.

We have an update available that will fix the issue. Please download the update and follow the FlightBox Update Tutorial instructions to update your unit.

My family and I are going to be out from June 6 – June 17 on a long-awaited vacation. We will be in France, exploring museums and enjoying awesome food. During this time, technical support will be limited email. Phone support will not be available. Orders placed between June 5 and June 17 may be delayed.

If you need any sort of support, please contact me ASAP. If you’re hoping for a FlightBox as a Father’s Day gift, please get your order in sooner rather than later.

Thanks in advance for your patience. We’ve had five solid months of FlightBox, and we’re already gearing up for Oshkosh. This break is going to really help recharge the batteries.

I’ve had a number of users ask for an easy way to keep their FlightBox from sliding around on the glare shield. I ran a number of prototypes on the 3D printer and eventually settled on a design that is both simple and effective. It includes a broad base with a layer of sticky open cell neoprene rubber that prevents the system from moving. It’s made from the same Botaron aviation-grade plastic as the FlightBox and can be left on the glare shield for those who take their FlightBox home at the end of each flight. 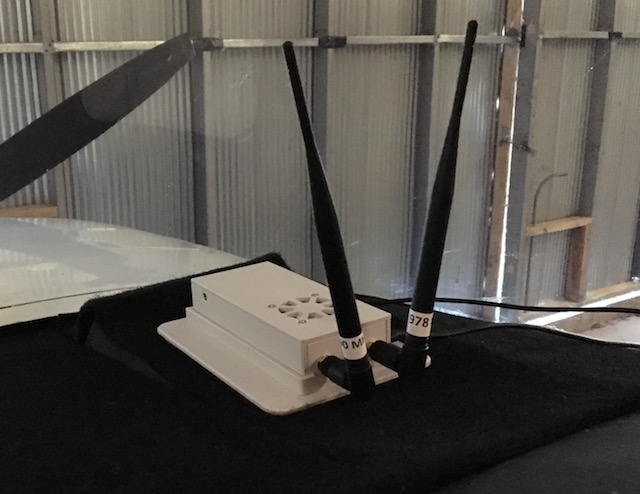 I’ve ordered 100 of these from the fabricator and should have them by the time we get back from vacation. They will sell for $26.50 plus shipping. We will start offering them as an add-on to the kits as soon as they arrive.

FlightBox user Mike Albertson sent in a great suggestion for anyone who has their remote GPS receiver installed in a hard to reach location. Rather than removing the GPS every time you want to take the FlightBox out of the airplane, use an inexpensive USB pigtail cable:

Unlike the other players in the ADS-B market, we don’t have a great deal of budget for marketing. That’s a large part of what makes FlightBox so much less expensive. If you happen to have a few minutes, please do us a favor. Download and print our flyer and hang it up on the bulletin board at your airport or in your EAA chapter hangar. 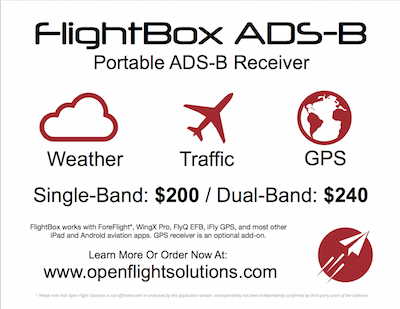