So about the blog… The past few months have been pretty busy, and unfortunately the blog has been a bit neglected. I’m going to try to remedy that starting now. (But you know how life goes.)

You might have noticed the addition of a new product – something called FlightView. If you’re a regular follower of this blog, you might recall a post from some 16 months ago announcing a new EFIS. I think I even used the phrase “coming soon.” Oops. That said, I think you will find it worth the wait.

FlightView is an Electronic Flight Information System (EFIS). That’s a bit of a catch-all term that gets used for a wide range of products. Some are basically attitude indicators with… attitude. Others (like FlightView) could best be described as operating systems for aircraft. They either provide or are connected to every major system on the airframe: flight instruments, engine instruments, navigation, terrain awareness, traffic, weather, communications, and surveillance. They tie all of those systems and technologies and data sources together into a single coherent view.

What’s really cool about EFIS* technology is that, unlike steam gauges or even independent digital instruments, the whole is truly greater than the sum of its parts. The EFIS has the ability to constantly scan all of the inputs and cross-check one against another. Yes, this is something that us pilots are supposed to do, and should continue to do even if we have an EFIS. But let’s be honest here – the machine has some advantages. It doesn’t get distracted by neat cloud formations. It doesn’t get into engrossing conversations with passengers. It doesn’t try to pick out its mom’s house from 5000 feet. It stays on the ball, all the time.

Variations on the EFIS concept have been around for a while now. Modern airliners have had extremely sophisticated digital flight deck systems for the past thirty years. Elements of those began to trickle down to the GA world in the late 1990s with products like Garmin’s G1000. The heavy iron systems generally cost tens of millions. The first generation GA systems cost tens of thousands. Thanks to Moore’s Law, the mobile computing revolution, IoT, and MEMS sensors, FlightView gets to shave another order of magnitude (or more) off the price tag.

FlightView is made up of a number of independent systems, all of which are built to work together. Where the typical EFIS has a very expensive custom display system (screen + computer + knobs), FlightView uses an off-the-shelf iPad. The iPad runs an app which communicates with a network of sensors, receivers, and interfaces. The various sensors, receivers, and interfaces are spread across a set of small boxes that add up to about two pounds.

One of these boxes is a souped-up version of our FlightBox Pro (called the FlightBox Pro EXP) which serves as the hub of the system. Where the typical EFIS sports multiple DB-25, DC-37, or DD-50 connectors, FlightView has two USB ports which connect to USB hubs. We polled the membership of a number of EAA chapters and found that the least favorite part of an avionics install was building the wiring harness. Using USB simplifies the installation process significantly.

The other boxes are an air data computer and an engine monitor. The air data computer (ADC) connects to the pitot and static lines and to an OAT probe. It sends airspeeds, altitude, vertical speed, and outside air temp back to the FlightBox Pro EXP. The engine monitoring system (EMS) box has ports for all the standard engine probes and senders: RPM, manifold pressure, fuel level, fuel flow, EGT, CHT, etc. Both the ADC and the EMS have modular jacks (think land-line phones) that connect to the USB cables from the FlightBox. They both also contains Wifi radios that can connect to the FlightBox network if the serial link is interrupted.

The iPad and the three boxes make up the main components of the system. We also offer USB-to-RS232 cables that can interface with COM radios, transponders, autopilots, and ELTs. To round out the package we’re also launching an iPad mount with active cooling and a gizmo we’re calling FlightBar. FlightBar adds a set of two knob and six buttons to the FlightView display (iPad), making the system much easier to use in turbulence. (If you’ve ever tried to use a touch screen in the bumps, you understand what I’m talking about.) 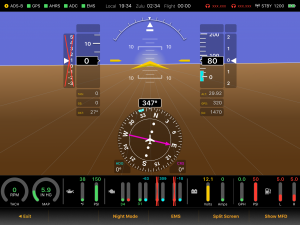 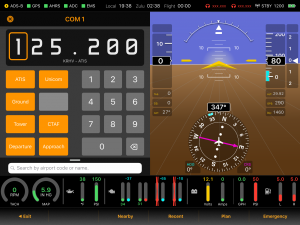 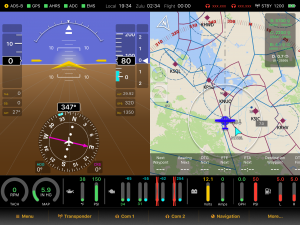 The most visible part of FlightView is the app. If you’ve used an EFB app, you have some idea of what to expect. The FlightView app includes a primary flight display (PFD) view, a multifunction display (MFD) view, an engine monitor system (EMS) bar, and pop-up views for radios, transponders, and other systems. The FlightView system supports up to three displays – three iPads simultaneously displaying aircraft data. (Oh, and there’s no charge for the extra displays other than cost of the iPads.) Displays can be full screen (i.e. all PFD or all MFD) or split 50/50. The EMS bar is optional.

The list of features is pretty long and, because the front end of the EFIS is an app, only going to get longer. (You can check out the current list here.) The backlog of features we plan to add is pretty long. (Yes, synthetic vision is on it.) Before we start in on those projects we want to get feedback from a broad group of users. And that brings me to this…

To help out, here’s a video that walks you through the process. (Wherever it mentions and email, just refer to the links above.)

We will be formally launching FlightView at Oshkosh 2019. If you’re going, please stop by and see us. We will be in Hangar A (Aircraft Spruce) in Booth 1043. That’s on the left-most row of the hangar towards the back. We will have a demo system running in the booth. We will also have our RV-6A testbed out in Homebuilt Parking for those who want to take a look at FlightView in its natural environment.

We will be giving a forum presentation on Thursday (7/25), at 4 PM on Forum Stage 11. The forum will cover ways to save and simplify on avionics for your homebuilt or LSA.

Did I mention that FlightView is the lowest cost EFIS on the market? The normal price for the core hardware bundle (FlightBox Pro EXP, air data computer, and engine monitor) will be $2000. Between now and July 31 we are offering an early-bird AirVenture special: $1500.

You will also need an iPad and the probes for the engine monitor, but that still gets you a complete EFIS for less than half the cost of a system from the usual suspects.