To Oshkosh With FlightView

To Oshkosh With FlightView

I’ve been flying with various versions of FlightView for nearly two years now. When I moved from Kansas City to Cupertino in July of 2018 I had an alpha version running on a RAM mount next to the Dynon system that came with my RV-6A. This gave me a safe and reliable way to test, tune, and validate FlightView. If something didn’t work as expected (which happened occasionally with the early versions) I had a set of instruments to fall back on.

That was a great way to start out, but eventually you have to “eat your own dog food” as they say in the tech world. Over the course of the past year the FlightView software and hardware had matured to the point where I was ready to take off the training wheels, so early this summer I took out the original panel – the Dynon, the steam gauges, and everything else – and replaced it with a dual-screen FlightView system tied to a TruTrak Vizion autopilot. 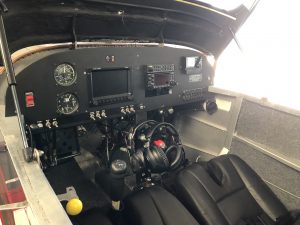 Before: note the steam gauges and the first-generation 7″ Dynon display. 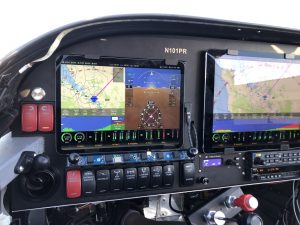 Once the upgrade was complete I started with taxi tests, followed by some short flights – first in the pattern, then out in the “practice area” south of San Jose. I flew the new configuration locally for roughly five hours, testing out the integration with the TruTrak and getting comfortable with using FlightView as the primary (and only) instrumentation and navigation system.

The five hours of local ops was a good way to test out the individual features and functions, but the real test of an EFIS is a long cross country. From San Jose to Oshkosh definitely qualifies: 1800 miles and 11+ hours of flight time by either the northern or southern route. (A truly direct route isn’t an option – too many mountains and restricted areas.) I figured that 22+ hours of cross-country would help shake out any remaining gremlins and would prove – to me, and to everyone else – that an “iPad EFIS” could really do the job.

On July 18 I loaded up the RV and headed out, following the southern route down California’s central valley, then across the desert south of Las Vegas to Santa Fe, New Mexico. The first segment took me from Reid-Hillview (KRHV) to a fuel stop in Apple Valley (KAPV) near Victorville. I pre-programmed the route into the FlightView FMS, starting with a direct leg to the Avenal VOR. From there I followed Victor airways to KAPV.

Back in Missouri I regularly flew “direct” everywhere. The midwest is mostly flat, making for plenty of places to land in an emergency. The west is beautiful but much less forgiving, with mountains, canyons, and forests covering most of the routes. Following established airways kept me in constant radio range of ATC and out of the many MOAs and restricted areas that cover huge sections of the map. Following the ancient VOR pathways also gave me a good opportunity to really test the navigation and autopilot functions of FlightView.

After two hours and fifteen minutes in the air I landed in Apple Valley for some good discount 100LL. A few minutes later I was back in the air, climbing slowly back up to 11,500′ to avoid the building heat and bumps. So far, so good. 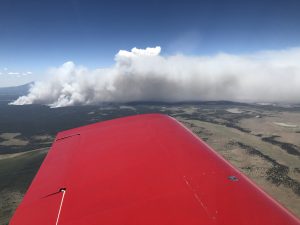 View of a forest fire near Flagstaff AZ

The segment from Apple Valley to Santa Fe was beautiful, in an unearthly and inhospitable way. Even following an airway I was in empty part of the world – nothing on the traffic display, nothing on the ground below. The 3 hour and 30 minute flight eventually took me over Prescott and Winslow Arizona, then Gallup New Mexico before arriving at Santa Fe municipal. Over the course of the flight I probably was “flying” a total of about ten minutes – the takeoff and landing. The rest of the time FlightView and the TruTrak guided the airplane along the course unaided.

The next day I was up and off the ground early, trying to beat the heatwave that had engulfed the central and eastern parts of the country. I plotted a course from KSAF to a small airport in southern Kansas that was showing a very attractive price for 100LL. I cruised north-east, again at 11,500′, until I hit my descent point about 30 miles from the destination. By the time I reached 9500′ the OAT had gone from a comfortable 73°F to 85°F. On the ground it was hovering just below 100°. This was uncomfortable, but it was also a good test of the cooling system for the iPads.

As you might know, the iPad’s Kryptonite is heat. Get the battery core temperature above about 95°F and it will shut down to protect the lithium cells from cooking. As airplanes often experience temps in excess of this, we built a custom mounting system (FlightDock) which uses a high-speed fan to keep the tablets running in conditions where they would otherwise shut down. I had spent a good bit of time testing this in lab conditions and the mount had managed to keep the iPads running in ambient temperature that topped out at 108°F.

On the ground in Sublette, Kansas (19S), the cabin temp quickly climbed past 100° while I tried, unsuccessfully, to get avgas from an apparently empty pump. By the time I gave up and climbed back into the cockpit, the seats were hot enough to sting and the panel was too hot to touch. I started the engine and powered on the avionics master, bringing the FlightDock fans online. The thermal sensors in the fan controllers kicked into high gear, blasting the backs of the iPads. Both came online and loaded the FlightView app as normal. A quick check of the hardware status page showed that they were experiencing some thermal stress (which causes iOS to throttle back some functions) but they behaved normally and easily got me to Dodge City (KDDC) where I was able to fuel up.

The leg from Dodge City to Liberty, Missouri was another two hours and twenty minutes at high altitude. The air temp was into the 90s up to about 8500 MSL, so I stuck to 11,500 until I was just outside the Kansas City class bravo ring, then descended at 1500′ / minute through the hot air, muggy air to land at Roosterville (yep, that’s the name – look it up – 0N0) airport. I learned to fly at Roosterville, and was based there until I moved to California. Great little airport with a 20′ wide x 2700′ long runway (with a hump in the middle, and a slight dog-leg).

Saturday morning I checked the weather and found that Oshkosh was expecting severe weather. As it turned out, the forecast was correct: torrential rains and a number of tornados (or micro-bursts, depending on who you ask) hit the greater Fox Valley area, turning Wittman Field into a shallow lake. By early afternoon word went out that even if the weather cleared, there was no way to park aircraft on the grass. Anyone without a hard-surface parking reservation was to be turned away. By that point I had checked out of my hotel, but fortunately a friend had a very nice (air conditioned) camper trailer stored at Roosterville that I was able to borrow. (Thanks again, Todd!)

Unfortunately, the weather that had been plaguing Minneapolis and Oshkosh on Saturday swung south and hit Kansas City early Sunday morning, leaving a layer of scud hanging over most of the midwest. The RV (my 6A, not the camper) was tied down on the ramp without its canopy cover and was a bit damp in the morning. It took me about an hour to get things dried out, by which time a hole had formed in the low-level clouds. I launched and quickly found myself in perfectly still, cool air between the broken ground layer and another much higher layer of clouds. 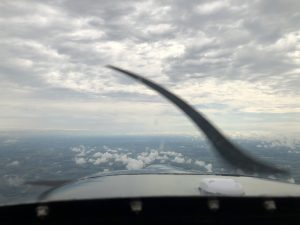 At the time I launched, KOSH was still not taking any aircraft that would be parking on the grass. As I was flying north, an army of trucks normally used to drain porta-potties was working diligently to drain the swamps in and around Wittman. About forty-five minutes out I called up Flight Service and asked for an update on parking. Still closed. Ok…. Rather than waste gas, I decided to stop in Portage, Wisconsin (C47).

The ramp at Portage was its own mini-Oshkosh, with probably two dozen aircraft tied down and waiting. Shortly after I landed I got another text from the automated status system letting me know that the field was still closed. Fortunately, Fond du Lac (KFLD) – about 25 miles south of Oshkosh – was open and taking aircraft as long as they were willing and able to park on the grass. Sold. 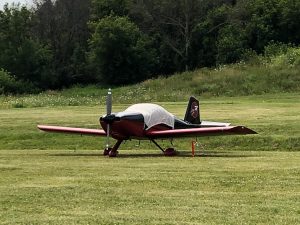 A little after 1:00 PM CDT, I landed at KFDL and was marshaled to a spot on the far side of the field. With the extra stops I had traveled 1850 nautical miles in just shy of 12 flight hours. At least 10 of those hours were actually flown by FlightView and the TruTrak. The system handled turbulence over the mountains in Arizona, the heat across the midwest, and a soggy night on the ground in Kansas City. It wasn’t perfect – I had a couple of thermocouples that became intermittent, and the fuel-flow dropped out for a bit – but it got me there in comfort and style.

My one regret: I flew myself in the RV both to test out the system and also to show it off to everyone. Unfortunately, I ended up leaving the airplane at KFLD. It would have been nice to have it over at KOSH. Fortunately, the three-screen demo panel I brought did a pretty good job of that.

SAVE & ACCEPT
Go to Top