This isn’t my first entrepreneurial rodeo, but it’s been a while. I’ve spent the past several weeks re-learning several lessons. The first of these is that platform changes are never as easy as you expect. We recently switched from using the Raspberry Pi 2 to the new Raspberry Pi 3. In theory the change should have been quite simple and a small net positive for both users and Open Flight. I ordered two of them the day they were released and put more than 25 flight hours on them before we made the switch. But – as anyone in the IT field knows – just because something works perfectly on one system (or two) is no guarantee that it will do the same on all systems – even theoretically identical semi-embedded devices like the Raspberry Pi. I re-learned the hard way that a larger sample is mandatory.

At the end of April we sent out the first 75 kits based on the Pi 3. We had approximately 25 of them mysteriously fail – no wifi. After a weekend of research it turned out to be an incredibly subtle change in the shell script command interpreter on the new Linux operating system. A script that had been working fine for months on the Pi 2 failed to work correctly on some of the new Pi 3s. A somewhat longer power cable that we shipped with the Pi 3 kits exacerbated the problem significantly. I spent the next several days writing and testing a new script. We tested it on 10 different Pi 3s from two lots. We re-imaged 250 SD cards, built up over 50 “recovery packs”, and shipped them out to anyone who had problems Pi 3. A week later we had almost everyone up and running. (If you’re not, please contact me ASAP.)

The lesson is to never, ever take for granted that something works. If we make another platform change in the future, I will round up as many beta testers as I did for the original FlightBox launch early in the year. We had close to a dozen people test-flying the first build, and we had very little in the way of trouble with it. Lesson learned. Sincere apologies to anyone who was bit by this bug. 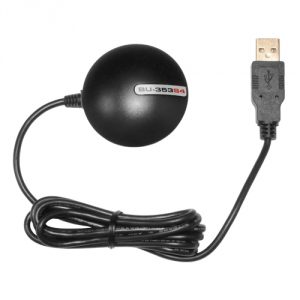 For everyone who’s been waiting for a remote GPS option, the wait is over. We have 100 remote GPS units in stock and more on order. You can order them here. The list price is $35, but I am offering a one-time $10 discount to all existing FlightBox owners (anyone who has completed an order prior to to today). Please email me for your personal discount code. Before you order, please note that we’re working on a complete “remote kit” that includes the GPS as well as cables and a suction cup window mount for the ADS-B antennas. If you want the full remote solution, wait another few weeks you can save yourself a bit on shipping. The $10 discount will apply to that as well.

The remote GPS will require a bit of minor surgery on your FlightBox case. You may have noticed the U-shaped partial cut at the end of the box near the USB risers. To use the remote GPS you will need to cut out the “U” to make room for the USB plug from the GPS. I hope to publish a video showing how this is done in the next few days. The plastic is thin and it is quite simple to make the cut with an Xacto knife.

We’ve made the decision to phase out the VK-172 GPS module that we’ve been shipping since we launched. When they work, the VK-172s are great little GPSs, but we’ve had enough marginal performers that it makes more sense to remove it and instead offer an optional product that has top-notch quality, stateside technical support, and an RMA program. (Sending products back to China is… problematic.) We’re dropping the price of the dual band kit from $250 to $240. The remote GPS will be available as a $35 add-on, which makes it a bit more expensive than it is today – but only if you want or need the GPS feature.

At the same time we are adding an option for high gain antennas. These are 978 MHz and 1090 MHz tuned antennas that are 1/2 wave, rather than the 1/4 wave of the stock antennas. They significantly increase the receiving power (gain) of the system, which can be useful in areas with limited ADS-B coverage. They’re rather large (about twice the size of the stock antennas) but well worth it if you’re a long way from towers and need to boost the signal. They will add $10 to the cost of a kit.

The arrangement I’ve worked out with the manufacturer only allows us to sell them as part of a kit, but they are available on Amazon. (As of this moment they are out of stock. The seller assures me that more are on the way.)

I probably get five emails a week asking about the state of the AHRS project, so here’s an update. We’re making good progress. We have the initial hardware design complete and hope to get our first round of prototypes later this month. We are still working towards Oshkosh as a launch target. I will have a blog post dedicated exclusively to AHRS next week, so please check back.