Last week was something of a blurr. On Sunday I loaded up the Tiger with everything I needed for an exhibit (table, banner, demo FlightBoxes, tablet stands, tablets, etc.) and flew from Liberty, Missouri to Thomasville, Georgia. I spent the night there with some old friends (thanks, Ryan and Gina!) then got up on Monday morning and flew on to Lakeland for Sun-N-Fun 2016. 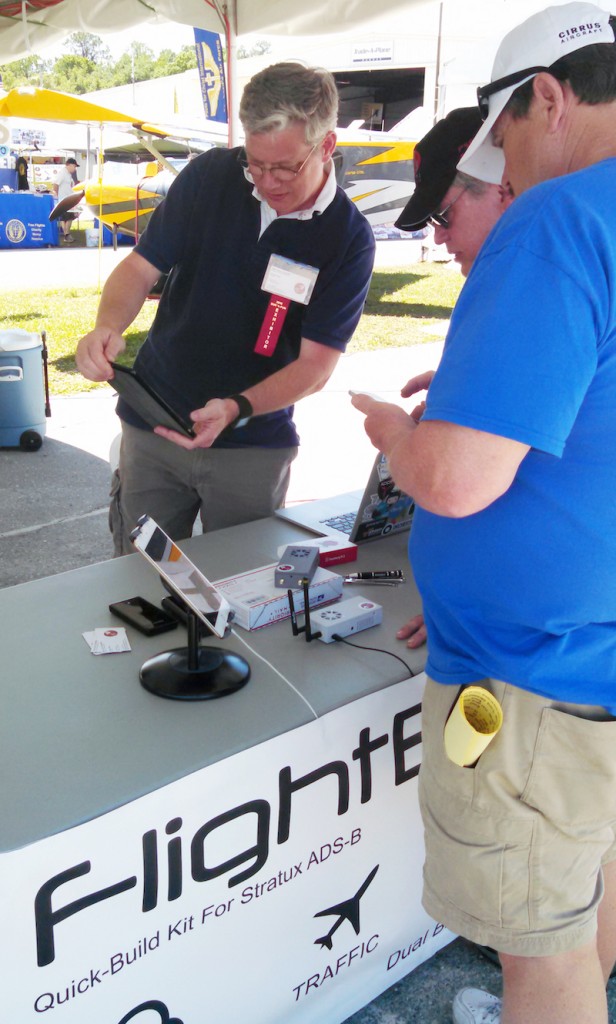 If you’ve never done an arrival into a busy show like SnF, I highly recommend it – it’s both challenging and a lot of fun. I was really glad to have ADS-B traffic on the way in, as the airspace became rather crowded as I approached the rendezvous point near Lake Parker. Everything went exactly as described in the NOTAM – everyone queued up and flew west to I-4, then followed it south-west until we crossed a golf course. We turned south and entered the pattern mid-field. The controllers called our entry into downwind, base, and final from that point using our aircraft type and color. Huge kudos to the controllers – that has to be a stressful job, and they all handled it with grace and humor.

I’ve been to Oshkosh several times, but this was my first time at Sun-N-Fun. It’s not as big, but that hardly tells you anything as Oshkosh is huge. I parked the Tiger in General Parking, picked up my rental car, and hauled my gear over to the exhibit area. I partnered with Avilution for SnF. They make Droid EFB, an excellent flight planning and navigation app build for Android tablets and phones (it works brilliantly with FlightBox). They also are in the process of rolling out XFS, or eXtensible Flight System – a new concept in avionics based on the idea that the hardware should be generic and the actual functionality should be entirely driven by software. Big thanks to Mark, Jacek, and the rest of the Avilution team for sharing space and helping cover the booth when I stepped out.

Most of the week was spent talking FlightBox with hundreds of pilots. We had a system up and running, receiving data from all the ADS-B out equipped aircraft around Lakeland and from the ground tower located across the field. That fed traffic and weather to two tablets: a Samsung Galaxy Tab S2 running Droid EFB and Avare and an iPad Mini 4 running ForeFlight* and Aerovie Reports. I used a second FlightBox kit to show potential customers just how easy it is to assemble. I think I must have put that kit together 200 times, and every time somebody in the group gathered around the table said, “Wow, that really is easy.”

First Crack In The FAA Wall

One of the most interesting things to come out of Sun-N-Fun was the announcement that Dynon Avionics and EAA had collaborated to receive STC approval for Dynon’s D10A mini-EFIS. This is huge news because it’s the first time that a product built for the experimental market has been approved for use in certificated aircraft without going through the usual TSO process. The AML currently covers the Cessna 172 and 150 families as well as the Piper PA-28 and PA-38 lines. Additional aircraft will be added to the AML in the near future. I’m friends with several of the people at Dynon and immediately volunteered the Tiger as a test platform. (I suspect that many other people did the same.)

Dynon and EAA made use of a new ASTM Standard: 3153-15 Verification of Avionics Systems. I’m extremely proud to mention that I served on the task group that developed that standard. Where the TSO process makes use of a very complicated, expensive, and frankly rather hand-wavy approach to software safety called DO-178, the new ASTM standard follows best practices used by manufacturers serving the experimental and LSA markets. Where DO-178 is several hundred pages of process, ASTM-3153-15 is two pages long and uses a simple, practical procedure to identify critical functions, specify tests, execute those tests, and document the results. The cost to the manufacturer is a fraction of what it would take for TSO approval, with a level of safety which is appropriate for a light, personal aircraft.

I really can’t overstate how important this is. It’s a small step but it may be the first of many that will ultimately allow owners of legacy aircraft to update with safety-enhancing technology. The D10A is officially seen as an attitude indicator, not an EFIS – you can’t remove any of your other instruments. Only the attitude is “primary” with the many other features being advisory. Understood. I’ll take it.

We’ve had a number of users contact us looking for an easy way to remote-mount the GPS. The radio noise from the wifi transceiver, the brushless motor on the fan, and the Raspberry Pi all impact the sensitivity of the GPS. Add to that the radio noise from various aircraft systems and you can wind up with only modest performance. While we would never recommend using the FlightBox GPS as a primary navigation source (that requires FAA testing and certification) we are considering offering an option that would allow you to remote-mount a somewhat more sensitive GPS for greater accuracy. 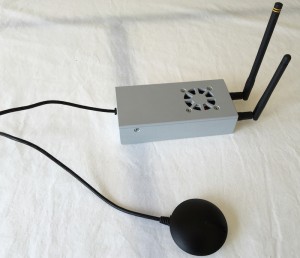 The FlightBox case is designed to allow you to cut out the U-shaped notch at the end and insert a USB extension cord. This can be used to remote the existing GPS, but you then need to build some kind of housing for it. We’ve done some research and it looks like we may be able to offer a somewhat more sensitive GPS that comes with a 4′ USB cable. This would give you the flexibility to locate the receiver “puck” away from the FlightBox. It would also make it much easier for anyone who wants to blind-mount their FlightBox by remoting the standard antennas or by using a belly-mounted transponder or DME antenna.

If you’re interested in a remote GPS or antenna option, please send me an email. If I get enough interest, I will place an order and write up some instructions.

Low Power Blues: Over the past few weeks I’ve had a number of people call up with systems that appear to be working but which do not establish a “FlightBox-XXXXX” wifi network. In every case the cause has been weak power supplies: either a 1 amp wall charger or even the low-power USB port on a laptop. PLEASE don’t try to run FlightBox off of any power source – battery or adapter – that is not rated for at least 2 amps. It will not work!

Floppy Antenna: I’ve also received a number of calls regarding the 978 MHz antenna flopping over. This happens when you can’t screw it on tight enough for the SMA connectors to properly mate. You need to either tighten up the nut on the SMA bulkhead connector. If that doesn’t fix it (and don’t go crazy and strip the nut or the connector) you may need to remove the lock washer. That will give you enough thread on the SMA barrel to properly tighten up the antenna.

This Fan Sucks: When I wrote up the instruction guide, I failed to mention that the fan needs to blow out through the top. I covered it on the video, so if you watched that, all is probably well. If you didn’t, there’s some chance that your fan is sucking in air from on top of the box and blowing it out the vents in the side. That’s backwards. You want to mount the fan so that the sticker is facing the plastic top and not visible. You’ll find arrow marks molded into the plastic showing the direction of spin and air motion. Air should go out through the top!

New FAQ and Troubleshooting Guide: We’ve compiled some of the most common questions about FlightBox into an FAQ (Frequently Asked Question) page. We’ve compiled many of the most common issues users experience into a Troubleshooting Guide page. If you have questions or troubles, take a look at either / both for answer. If you don’t find what you need there, give us a call or drop us an email.

If you like what FlightBox does for you and think other pilots at your airport might want give it a try, please download this flyer, print it, and post it on the bulletin board. We truly appreciate your help in making aviation safer and more affordable.