But… the most common issue we run into is power. Many of the tech support calls and emails we field each week come down to inadequate power. After talking with a group of users at our booth in Oshkosh, it became abundantly clear that providing a number of trusted, reliable option for power was important. As a result we immediately added a USB cigarette lighter adapter to our catalog. The search for a battery took a bit longer. 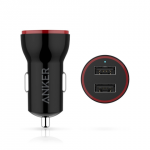 Fortunately, it turns out that the need for a good source of portable USB power is not unique to FlightBox. As it turns out, the popular Pokemon Go game has made backup power for mobile phones practically a requirement. An old friend here in the KC area decided to capitalize on the demand for high quality batteries and ordered a large batch built to spec by a reputable manufacturer overseas. (At this point only Tesla is building lithium battery systems here in the States.) He gave me a sample to test and after a few weeks of abuse I am happy to announce that we now offer a battery.

The USB packs that we are selling are rated at 10,000 mAh which typically provide more than five hours of flight time on a full charge. (I’ve had the test unit last for 7.5 hours, but that was under cool, comfortable lab conditions.) They’re slim and weigh in at only 0.45 pounds. Most importantly, they consistently deliver up to 2.1 amps – more than enough power for a FlightBox. We’re offering them for $35 on the web store. They will come with a 6-inch USB cable and a set of velcro dots to (optionally) attach the battery to the FlightBox.

Note the supplies are limited: the Pokemon craze took up a big chunk of the supply, so we only have 50 in stock at the moment. More are on the way and should be here in September.